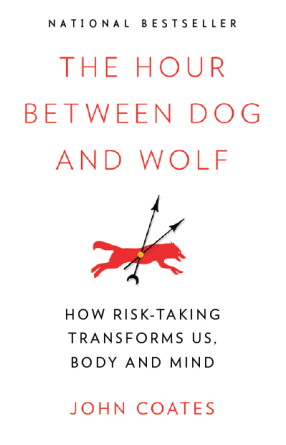 The Hour Between Dog and Wolf

– Book-of-the-Month, Magazine of the British Army.

In this startling book, physiologist and former Wall Street trader John Coates graphically illustrates what happens to your body when you place a bet in the financial markets. He tells a gripping story of a group of traders caught in a bull market and then a crash. As the excitement builds he takes us inside the traders’ bodies to see the biology of risk taking at work, a biology shared by athletes, politicians, soldiers – anyone venturing beyond their safety zone. Coates then discusses how men and women excel at different types of risks; the stress of failure; and how we can train our bodies so that they help rather than hinder our risk taking.

Praise for The Hour Between Dog and Wolf

“A fascinating examination of how humans think not just with the brain but also the body during periods of acute stress. It is a must-read.” Soldier, Magazine of the British Army

“This is an absolutely fascinating and important book. In lucid and entertaining prose, Coates explains why biology matters in finance. One of the most original and thought-provoking works about finance to have emerged in years.” Gillian Tett, Financial Times.

“A highly speculative and profoundly unconventional book. It’s also so absorbing that I wound up reading it twice and taking copious notes.” Bloomberg

“If anyone is qualified to unify the seemingly disparate subjects of financial markets and neurology, it’s John Coates…The Hour Between Dog and Wolf is a powerful distillation of his work.” The Daily Beast

“Some of the most interesting studies have been done by a former Goldman Sachs and Deutsche Bank trader turned neuroscientist, John Coates, whose book The Hour Between Dog and Wolf lays out the biochemistry of the Big Trade.” Time Magazine

“It makes intuitive sense that biological responses inform the mood of the markets. This book puts flesh on that idea.” The Economist

“A compelling narrative of the links between biology and the trading floor. It’s one of the most intriguing books I’ve read in a long time. . . Wonderfully clear prose.” Reading the Markets

“This brilliant book … should be top of the reading list.” Financial Times

“This book looks at the biology of why Homo economicus is a myth, and no one is better positioned to write this than Coates – he is a neuroscientist AND an economist AND an ex-Wall Street trader AND a spectacular writer. A superb book.” Robert Sapolsky, neuroscientist, Stanford University

“A vivid and brilliantly written narrative: by integrating his knowledge of neuroscience with his experience as a Wall Street trader, Coates pulls back the curtain on the physiological mechanisms that prepare some individuals to thrive and others to be devastated by confronting risk.” Stephen Porges, University of Illinois at Chicago